Bangalore, also rendered Bengaluru is the capital of the Indian state of Karnataka. Located on the Deccan Plateau in the south-eastern part of Karnataka, Bangalore is India’s third most populous city and fifth-most populous urban agglomeration. Bangalore is well known as a hub for India’s information technology sector. It is among the top 10 preferred entrepreneurial locations in the world.

A succession of South Indian dynasties ruled the region of Bangalore until in 1537 AD, Kempé Gowdā—a feudatory ruler under the Vijayanagara Empire—established a mud fort considered to be the foundation of modern Bangalore. Bangalore continued to be a cantonment of the British and a major city of the Princely State of Mysore which existed as a nominally sovereign entity of the British Raj. Following the independence of India in 1947, Bangalore became the capital of Mysore state, and remained capital when the new Indian state of Karnataka was formed in 1956.

As a large and growing metropolis, Bangalore is home to many well-recognized colleges and research institutions in India. Numerous public sector heavy industries, software companies, aerospace, telecommunications, and defense organizations are located in the city. Bangalore is known as the Silicon Valley of India because of its position as the nation’s leading IT exporter. A demographically diverse city, Bangalore is a major economic and cultural hub and the second fastest growing major metropolis in India.

There are numerous gardens and historical sites within the city to keep you occupied. The Vidhan Soudha or the State Secretariat is the prime attraction. The Government Museum of Bangalore and the Visvesvaraya Technological and Industrial Museum are worth visiting. The Lal Bagh Botanical Gardens, which holds a number of flower shows, especially during the Republic Day, attracts several tourists. The Fort and Palace of Tipu Sultan and Palace are other important places in Bangalore. You may pray at the temple dedicated to Nandi, the Bull besides the Venkataramanaswamy Temple, the Gavi Gangadhareswara Cave Temple and the Someshwara Temple. The Ulsoor Lake is an ideal spot for picnics.

Tipu Sultan’s Summer Palace was the summer residence of Tipu Sultan till his death in the year 1799 during the Fourth Anglo-Mysore War. Its construction was started by Hyder Ali within the walls of the Bangalore Fort and completed during the reign of Tipu Sultan in the year 1791. This magnificent structure has been built entirely with French Rose wood and stands adorned with pillars, arches and balconies. There is also a small museum in the palace which is open to public. Bandipur National Park, established in 1973 as a tiger reserve under Project Tiger, is a national park located in the south Indian state of Karnataka. It was once a private hunting reserve for the Maharaja of the Kingdom of Mysore. Bandipur is known for its wildlife and has many types of biomes, but dry deciduous forest is dominant. Bandipur is located in Gundlupet taluq of Chamarajanagar district. It is about 80 kilometers from the city of Mysore on the route to a major tourist destination of Ooty. As a result, Bandipur sees a lot of tourist traffic and there are a lot of wildlife fatalities caused by speeding vehicles that are reported each year. There is a ban on traffic from the hours of dusk to dawn to help bring down deaths of wildlife.

This park was declared the thirty seventh Project Tiger tiger reserve in 1999. It is part of the Nilgiri Biosphere Reserve. The Western Ghats Nilgiri Sub-Cluster of 6,000 km2, including all of Nagarhole National Park, is under consideration by the UNESCO World Heritage Committee for selection as a World Heritage Site. The park has rich forest cover, small streams, hills, valleys and waterfalls. The park has a healthy tiger-predator ratio, with many tigers, Indian bison and elephants. Kudremukh also spelled Kuduremukha is a mountain range in Chikkamagaluru district, in Karnataka, India. It is also the name of a small hill station town situated near the mountain, about 48 kilometers from Karkala and about 20 kilometers from Kalasa. The name Kuduremukha literally means ‘horse-face’ and refers to a particular picturesque view of a side of the mountain that resembles the same. It was also referred to as ‘Samseparvata’, historically since it was approached from Samse village. 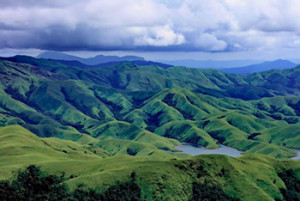 The town of Kudremukh is primarily an iron ore mining town where the government run Public Sector Kudremukh Iron Ore Company Ltd. operated till the last decade. It is noted for its scenic beauty. Owing to the dense forests, sighting wildlife can be challenging, though the area is rich in wildlife. Nonetheless the drive through the forest ranges can be enchanting and exhilarating.

The Tunga River and Bhadra river flow freely through the parklands. Kadambi waterfalls are a definite point of interest for anyone who travels to the spot. The animals found there include the Malabar civet, wild dogs, sloth bear and spotted deer.

Recently, it is declared a Tiger Reserve, as part of the Bhadra Tiger Sanctuary. It was declared by the honorable Union Environmental Minister, Mr. Jairam Ramesh.

Bannerghatta Biological Park is carved out of the Bannerghatta National Park in the year 2002 is situated 22 km south of Bangalore, Karnataka, India. The journey to the park takes nearly one and a half hours from Bangalore. This hilly place is the home for one of the richest natural, zoological reserves. The 25,000 acre (104.27 km²) zoological park makes this a major tourist attraction of Bangalore.The Bannerghatta Tiger and Lion Reserve has the reserve of Indian tigers including white tigers, lions and other mammals. Founded during the time that Shri Y.M.L Sharma was Chief Conservator of Forests of Karnataka after he wrote to the Central Government to grant land for a ‘National Park in Bannerghatta near Bangalore’. A Tiger & Lion Safari and Grand Safari (including herbivores) – conducted by the KSTDC, aid in the funding of the reserve. The Tiger Reserve of the park has been recognized by the Forest Department of India.

The country’s first Butterfly Park was established at the Bannerghatta Biological Park. It was inaugurated on Saturday November 25, 2006 by Kapil Sibal, Union Minister of Science and Technology. The Butterfly Park is spread across 7.5 acres of land. It comprises a butterfly conservatory, museum and an audio-visual room. The butterfly conservatory has a polycarbonate roof and is a 10, 000 sq ft. Circular enclosure, inside which the living environment has been carefully designed to support over 20 species of butterflies.

The environment has a tropical setting — complete with the humid climate, an artificial waterfall, a narrow walking bridge and host plants and shrubs that attract butterflies. 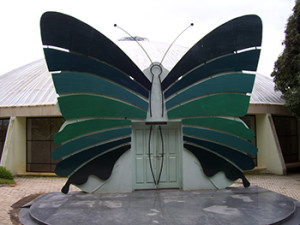 The conservatory leads to the second and third domes, which house the museum containing dioramas and exhibits of carefully preserved, exquisite butterflies.

Lal Bagh or Lal Bagh Botanical Gardens, meaning The Red Garden in English, is a famous botanical garden in southern Bangalore, India. The garden was originally commissioned by Hyder Ali, the ruler of Mysore, and later finished by his son Tipu Sultan. It has a famous glass house which hosts an annual flower show. Lal Bagh houses India’s largest collection of tropical plants, has an aquarium and a lake, and is one of the main tourist attractions in Bangalore. 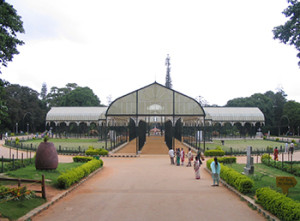 Cubbon is a landmark area of the Bangalore city, within the heart of city in the Central Administrative Area. Originally created in 1870, when Major General Richard Sankey was the then British Chief Engineer of Mysore state, it covered an area of 100 acres and subsequent expansion has taken place and the area reported now is about 300 acres. It has a rich recorded history of abundant flora and fauna plantations coupled with numerous impressive and aesthetically located buildings and statues of famous personages, in its precincts. This public park was first named as “Meade’s Park” after Sir John Meade, the acting Commissioner of Mysore in 1870 and subsequently renamed as Cubbon Park after the longest serving commissioner of the time, Sir Mark Cubbon.
Tourists visiting this Park in the city of Bangalore have nicknamed the city itself as ‘Garden City’. The importance of the Park to the city’s environment is best stated by two Urban Architects who have won the national competition to design ‘Freedom Park.’

Bengaluru is blessed with equitable climate all year round. In summer, temperatures range from 36 degrees to 20 degrees minimum and in winters the maximum temperature touches 27 degrees and the minimum is a pleasant 15 degree. It is best to avoid visiting during the monsoon which is in between July and September. October is a very good time to visit as the weather is invigorating and because it heralds the festive season.

Dr Mahendra Jain is an eminent and an extremely experienced Urologist ...

I had undergone treatment for my prostate in Germany 5 years back. Now I developed urethral stricture, I had lot of problem passing urine.

Mr Alexis is aged 72 yrs from East Africa was treated for his long standing urinary problem with a complex surgery. Now he is back in his country